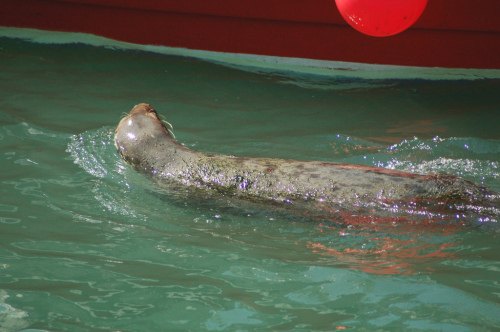 A Seal in Newquay Harbour

Cornwall Seals Videos – For some of us, watching seals pop up, their dog-like head watching or at least appearing to be watching us is one of the great pleasures if walking the coast path in Cornwall. There are many ways and locations top see seals from the rugged clifftops of Godrevy or on the north coast path near St Agnes.

The harbour seals in Newquay are a great summer attraction as visitors watch them from the harbour walls being fed by the returning boats. Seals can often be spotted in the surf or hauled out on rocks or on isolated beaches. The large colony at Godrevy can often be seen hauled out at Mutton Cove. 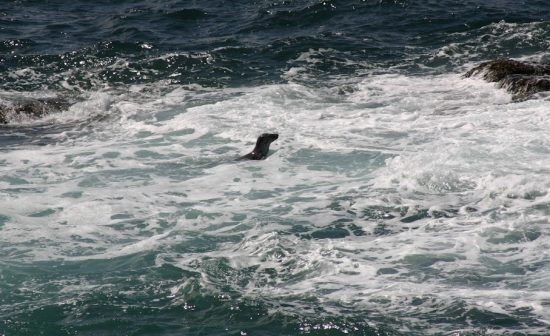 Seal in the surf at Godrevy

Of course for some get very close encounters. Divers will frequently experience seals around them so too Kayakers. They do appear at times to be very curious creatures and will often come close to divers and canoes to inspect. However, care should be taken. Never approach an apparently abandoned seal pup or attempt to get close to seals on the beach.

For more information on the seals around the coast of Cornwall from the Cornwall Wildlife Trust.  One of the best places to go seal spotting is at Mutton Cove at Godrevy.  There is a large colony of seals around the island and coast near Godrevy Lighthouse.

When walking the coastal path do NOT walk and watch at the same time!

Diving Seals Lands End Video taken off Lands end near the Longships lighthouse with close-ups of both the seals and the basking shark. Getting so close to being able to observe Seals in their natural habitat is a wonderful experience. Their natural curiosity as they watch and swim around the divers is fascinating to watch. The transformation from the lumbering inele [...]

The car park is run by the National Trust and there is an excellent cafe. Back to Seal Watching Videos For more information: Cornwall Wildlife Trust Seal Colonies around Cornwall. [...]

The Cornwall National Seal Sanctuary Gweek has its origins from an event in the winter of 1958 when Ken Jones found a baby seal washed up on the beach at St Agnes. The seal was only a few hours old. He took this baby seal back to the garden of his house near the beach. National Seal Sanctuary Gweek Now a very popular tourist attraction. Lookout in the local papers for d [...]

Close up encounters with the seals in a Kayak around Godrevy Island and Beach. Kayaking Godrevy Seals There is a large colony of seals at Godrevy and you can normally spot one if you take a few minutes to stop and watch when walking along the coast path. Please take care on the cliffs and do NOT walk and watch at the same time! Take some binoculars, step off the path a [...]

Seal Pup at Sanctuary – Great Day out and the kids love it.

April, a rescued seal pup (2007/8 season) at the National Seal Sanctuary, Gweek, Cornwall. The Seal Sanctuary rescues abandoned, stranded or injured seals and seals pups from around the coast of Cornwall. We have other videos and information on Cornwalls seals as well as a video of a seal pup release at Porthtowan beach Back to Seal Watching Videos For more informati [...]