The Falmouth Marine Band was originally formed in 1989 as a one-off attempt to support what was a flagging Falmouth Carnival. It was then, and remains today, a bit of fun. The clip above was taken at the Falmouth Oyster Festival in 2014.

However, when it was realised that there was a public demand for the marching cacophony, they started collecting money as they marched, and true to this day – every single penny collected by the Falmouth Marine Band has been donated in support of local good causes.

Each appearance at a Cornwall parade or Carnival is subject to careful and meticulous planning from the Bands HQ at the Star and Garter pub in Falmouth.

The Band do not support national charities, but try and fill a gap locally, supporting young people and others who may not get any help.

A visitor’s first experience of the band is often the faint sound of a drumming beat and the reverential mutterings around the gathered crowd of “Falmouth Marine Band”.

I have seen visitors stand up, move to get a better view, some obviously in anticipation of a white starched uniform, military precision, Pith helmets and maybe a Souza march. 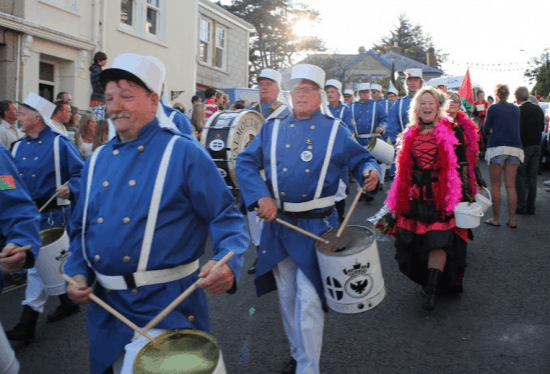 Falmouth Marine Band on the March

Now the Falmouth Marine Band have in the past worn a wide range of uniforms which probably at some point included Pith Helmets.  However, military precision they do not do, this is not a term easily associated with such a fine body of free-spirited individuals.

I have seen visitors reactions change from complete astonishment to smiles then laughter and cheers as the band march past playing what the French described as a “cacophony of l’humour anglais” on their drums and tins, stopping every so often to fire their feather canon.

Great fun and always for a good cause.  Do not miss the opportunity to savour the unique vision and sound of the Falmouth Marine Band if you are fortunate enough to have the opportunity.

The band appears with its collecting tins at many parades, carnivals and regattas around Cornwall.  We have another video where the Falmouth Marine band during the Mazey Day Parade in Penzance.  We have a collection of  Falmouth Marine Band Videos.

You can keep up with all of the endeavours of the Falmouth Marine Band on Facebook.

Back to Festival Videos