The Falmouth Marine Band Mazey Day: In their 2010 uniforms of the Royal Canadian Mounted Police in Penzance during the Mazey Day parade. 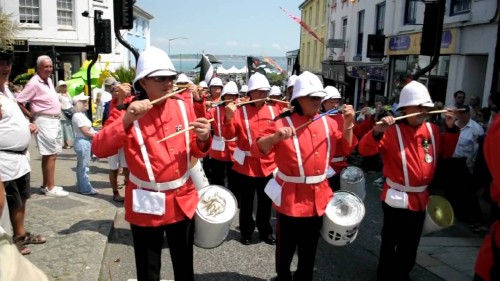 The Band will appear at many Cornwall festivals and parades during the summer season. The band has a new uniform each year which is revealed on the day of the Falmouth Carnival Parade each year.

The Marine Band is famous throughout Cornwall for its great work in raising money and smiles and creating laughter.

We have a video of the Falmouth Marine Band at the Falmouth Oyster Festival in 2014 and information on the history and background of the band here.