The Seals at Hells Mouth

Hells Mouth from the Coastal path

We had a lovely day and a good view of seals at Hells Mouth. We started our day with a trip to Godrevy thinking we could watch the seals at Mutton Cove. However, it was half term and the National Trust had to close the parking fields.

It can get busy at Godrevy and if the fields are not really dry cars get stuck and really plough up the field. There is limited parking without access to the fields.

We travelled on for a mile or so to Hells Mouth and had a stroll along the coastal path. In the past seen Peregrine Falcons here. On one occasion we watched two young birds on either side and flying and changing places with each other between the opposite cliff face. You could not help thinking this was some sort of practice routine.  We have another video of a seal pup at Hells Mouth

Alas, no Peregrines today but we did spot two seals at Hells Mouth and watched them in the surf for quite a while. We do not often see seals when we visit Hells Mouth. The smaller younger one was further out and kept rolling over just like a sea otter. The older one was closer inshore and was clearly hunting among the rocks and surf. Images of both are in the gallery below.

Video at Hells Mouth with the Seals

An excellent YouTube Video was taken at Hells Mouth that illustrates the height of the cliffs as well as the small beach at the foot of the cliff where the seals will haul out. 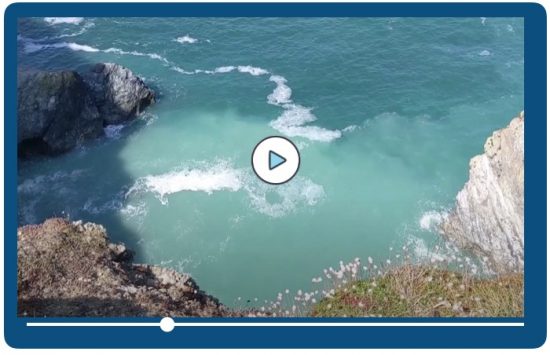 There is a large colony of seals along this part of the coast. Mutton Cove (accessible through the National Trust car park at Godrevy) is probably the best place to spot them hauled out at low tide. Also at low tide, the seals are often lying on the rocks around Godrevy lighthouse. Take binoculars if you can.

If you wish to visit and see if you can find the seals at Hells Mouth there are some laybys to park. The cafe has a car park. As usual, take great care on the path. Do not cross any of the wooden barriers. Do NOT walk and watch at the same time!

You can read more about the seals around the coast of Cornwall on the Cornwall Wildlife Trust website.