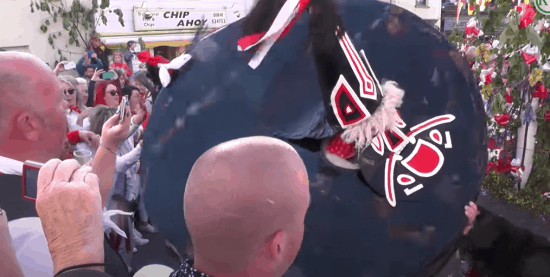 The Obby Oss Festival Padstow is an annual event generally accepted to have Celtic origins and celebrates the death of winter and the beginning of spring and is one of the oldest Festivals in the UK.

The Red ‘Oss and its supporters leave The Golden Lion an hour later. Both return around midday to commence the merriment again at 2 pm and then again at 6 pm.

Wikipedia says. . .
Obby Oss Festival Padstow
The celebration itself starts at midnight on 1 May with unaccompanied singing around the town starting at the Golden Lion Inn. By the morning, the town is dressed with greenery, flowers and flags, with the focus being the maypole. The climax arrives when two groups of dancers progress through the town, one of each team wearing a stylised recreation of a ‘horse.’ The two ‘osses are known as the “Old” and the “Blue Ribbon” ‘osses. During the day a number of “Junior” ‘osses appear, operated by children. Accompanied by drums and accordions and led by acolytes known as “Teasers”, each ‘oss is adorned by a gruesome mask and black frame-hung cape under which they try to catch young maidens as they pass through the town. The Blue ribbon oss is apparently of more recent origin. In the late 19th century it was supported by members of the Temperance movement who were trying to discourage the consumption of alcohol associated with the “old” ‘oss followers. After the first world war the imperative of temperance was lost, and the ‘oss became known as the Peace ‘Oss. Each ‘oss has a “stable” (in the case of the Old ‘Oss, the Golden Lion Inn and the Blue Ribbon ‘Oss, the Institute, from which they emerge at the start of the day’s proceedings and retire at the end. Sometimes in the late afternoon, the ‘osses may meet at the maypole and dance together. 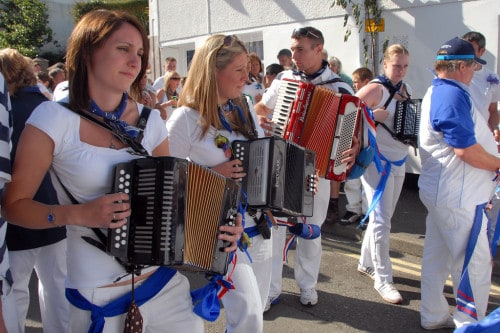