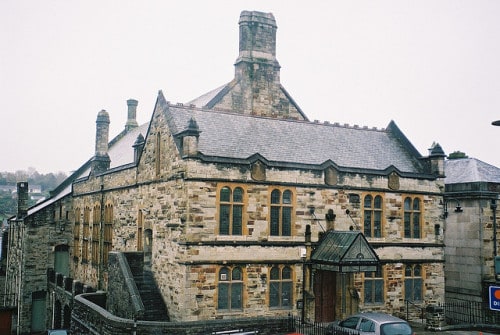 Bodmin Town Museum is situated on the lower ground floor of The Public Rooms which are on the site of Bodmin’s Franciscan Friary.

The Museum houses a rich heritage of artefacts and collections that tell the story of Bodmin from the earliest times. Displays of material relating to social life, trade and transport, rocks and minerals, the World Wars, Cornish kitchen, Law and Order.

Cornwall in the 18th and 19th centuries possessed many clockmakers. Indeed, the 1831 Census records 83 watch and clockmakers at work in the county. Amongst these, one of the most well known, was Belling of Bodmin. The Bellings worked between 1706 and 1850.
The Belling Lantern Clock
The Blacksmith

In 1831 there were sixteen blacksmiths, four wheelwrights and a farrier in the borough. The skills of the blacksmith often included those of the wheelwright and the farrier. In the blacksmith’s shop fire was kept burning in the hearth by the skilful use of bellows. With the coming of the car, the blacksmith turned his hand to engines instead of horses eventually becoming the garage mechanic.

New 2014 displays included:
1. An Introduction to World War I from the assassination to the Christmas truce of 1914;
2. The changing roles of women at the beginning of
World War I and its affect on fashion;
3. Miscellaneous fascinating and curious artefacts from our collection.

To read more about Cornwall’s history from the legends of King Arthur and early Celtic history to the fabulous wealth created during the mining boom.   Discover more Cornish engineers’ inventions and innovations in Steam engines and the emigration of skilled Cornish miners around the world. Discover  Cornwall’s maritime history from the fishing to the Packet ships of Falmouth and the Cable station to transmit messages around the empire.