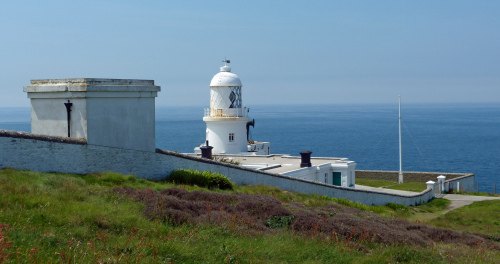 For nearly 100 years the lighthouse at Pendeensitting between St Just and St Ives, in the west of Cornwall has been guiding passing vessels and warning of the dangerous waters around Pendeen Watch.

The original oil lamp was replaced by an electric one in 1926. Around the lamp revolves an apparatus containing the lenses. This optic is very heavy, weighing 2½ tons, but as it floats in a trough containing 0.75 of a ton of mercury it can be set in motion by the merest touch. Pendeen Lighthouse was automated in 1995 with the keepers leaving the station on 3rd May.

Tours of the unique siren and its associated machinery are sometimes available. Willam Borlase and his descendant, archaeologist William Copeland Borlase, were born in the historic manor house nearby.

The lighthouse is now monitored and controlled via a telemetry link from the Trinity House Operational Control Centre at Harwich.

We have a link and more information on Trinity House and its work on our Cornwall Lighthouses page.

© Photograph of Pendeen Lighthouse with kind permission of Andrew Flckr