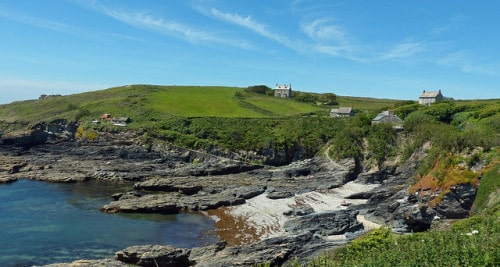 Secluded, with small coves of sand and shingle revealed at low tide. Prussia Cove has an old-world feel. Famous as the home of the Carter family, smugglers in the 18th century, one of whom was known as the King of Prussia. No lifeguard cover, but surf rescue equipment located on the beach. Parking and toilets, with a 5-minute walk down an unmade track to the cove. Dog-friendly beach.

Wikipedia says. . .
Prussia Cove
IPrussia Cove is known for the 18th-century ship-wrecker and smuggler John Carter (born 1738), also known as the “King of Prussia”; thought to be from a childhood game he played and the origin of the name for the area. Evidence of smuggling can be inferred by the building of the terrace of seven listed cottages overlooking Coule’s Cove and Mount’s Bay. They were built in 1826 by the Coastguard and are known as Coastguard Cottages. Built above and overlooking the coves is a Victorian house built in 1885 for du Boulay, former Archdeacon of Cornwall in his retirement. The coastal path passes though a “circus” formed by the listed buildings of Porth-en-Alls and include a crescent shaped “Lodge”. The complex was designed and built by Philip Tilden in 1911, but never completed due to the Great War. In April 1947 HMS Warspite ran aground here whilst being towed to the breakers yard. She was later towed to, beached and broken up at Marazion. ‘Calamity at Prussia Cove’

Check here for a listing of Cornwall Beaches with RNLI Lifeguard cover.

Back to Cornwall Surf Schools

Back to Cornwall Beaches

© Photograph of Prussia Cove with kind permission of Andrew Flckr