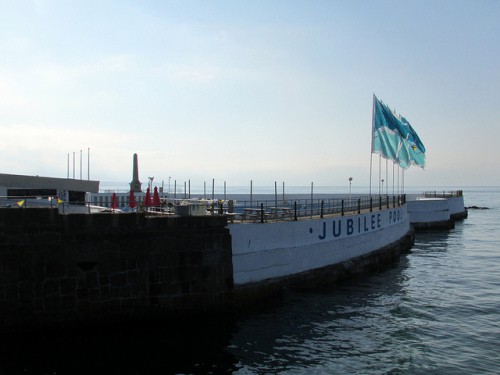 The beaches that appear at low tide near the area of the Promenade are known by several names, depending in which part you are on.

Battery Rock beach is right by the art deco open-air Jubilee swimming pool, which is open to the public for a small charge.

Heading towards Newlyn you then get to Promenade Beach, then on to Wherrytown (also known as Tolcarne) beach. There is easy access via steps to these beaches, with toilets located up on the promenade.

Wikipedia says. . .
Battery Beach
The rocks take their name from a gun battery that was situated there from 1739, following a petition by Penzance Borough council for protection from French naval attacks.

Battery Rocks have been a favourite location for local swimmers for as long as can be remembered, even at the heart of winter!They are also home to a variety of wildlife including a colony of rare purple sandpipers.

Battery Rocks and the adjacent tidal beach, a favourite local spot, are an integral part of the Pen Sans–Holy Headland–after which Penzance is named.

“The 18th century gun battery site is in fact a good deal older than that and is almost certainly the site mentioned in the report to King Philip of Spain written by Don Carlos de Amezola, commanding officer of the fleet of four Spanish warships that raided Mousehole, Newlyn and Penzance in August 1595.

Amazon has an excellent selection of Books, Guides and Maps for Penzance

Check here for a listing of Cornwall Beaches with RNLI Lifeguard cover.