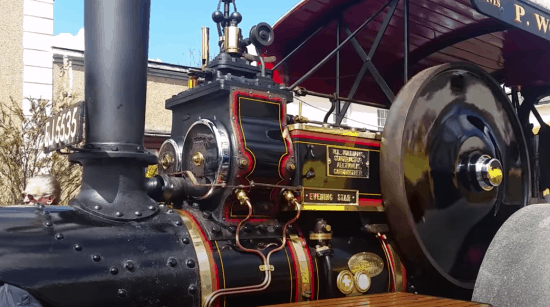 Trevithick Day Camborne: Richard Trevithick builder of the first full-scale working railway steam locomotive is celebrated by the people of Cornwall. The achievements of a brilliant Cornish engineer and inventor who most feel has never received the fame or recognition his pioneering work in steam engineering deserved.

Trevithick built a full-size steam road locomotive in 1801 on a site near the present-day Fore Street at Camborne. He named the carriage ‘Puffing Devil’ and, on Christmas Eve that year, he demonstrated it by successfully carrying several men up Fore Street and then continuing on up Camborne Hill, from Camborne Cross. He travelled on to the nearby village of Beacon with his cousin and associate, Andrew Vivian, steering.

This event is widely recognised as the first demonstration of transportation powered by steam, and it later inspired the popular Cornish folk song “Camborne Hill”.

A parade of steam engines, a fairground and a great party atmosphere on the day. There are Street Stalls, Choirs, Bands, Clowns, Buskers, Musicians, Dancers, Street Theatre, Processional Dances, Display of Vintage Vehicles, Model Exhibitions, Fairground Rides, Stationary Engine Display to say nothing of the sounds and smells of the steam engines.

You can read more on the Trevithick Day web site.

We have several other Trevithick Day videos on the site.

You can read more on Trevithick here.

Back to Cornwall Videos.