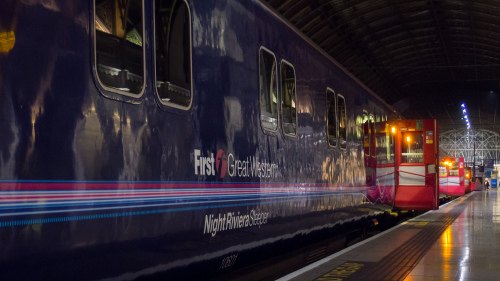 The Night Riviera at Paddington

The Penzance Sleeper Night Riviera Service is a remarkable travel experience.  Leaving a usually quiet and subdued Paddington station at the end of the day passengers can watch the lights of London pass by while enjoying a drink in the buffet car. Sleeper passengers have their breakfast served in their cabin and can use the First Class lounge at Paddington before departure.

The Great Western Railway first introduced a sleeper service to the south west in 1877. This first service ran from from London Paddington to Plymouth.

The train engines are usually one of four Class 57 type locomotives . All the carriages are now air-conditioned.    The Night Riviera train usually consists of seven carriages but at times of high demand can be increased to nine.

They are train engines are named after some of the original Great Western Railway “Castle Class” steam trains that originally ran on this route and were named after famous castles in Cornwall and Devon.

This first video is from the excellent series of videos made by the Cornwall Tourist Board. The sleeper train to Penzance from Paddington is a remarkable travel experience which has been captured well in this video. Click here to view the Video

This video is from the author of the seat61 seat blog and once again captures the atmosphere and some of the sights and sounds of the Night Riviera experience. Click here to view the Video