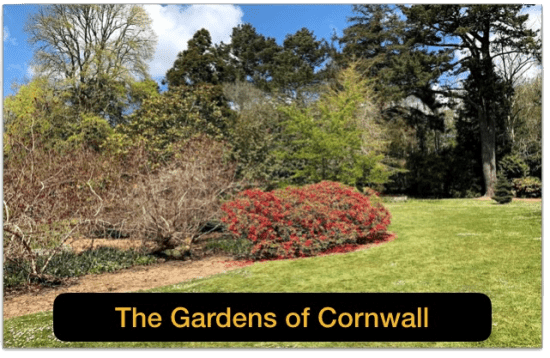 Nestled in a secluded valley above Porthluney Cove, this 100-acres of woodland gardens is one of Britain’s horticultural treasures.

The Caerhays Castle Gardens have been created around a grand castle built by John Nash in 1808. Since 1370 only two families have resided here, and when the Williams family took over 150 years ago it was little more than a dilapidated castle surrounded by a deer park.

Take a guided tour of the interior to delve further into its outstanding English Heritage, but it is the informal woodland garden that makes this an exciting horticultural hotspot. Created by J.C. Williams, who sponsored plant-hunting expeditions to China at the turn of the 19th Century, the gardens are the result of some of the first adventurous plant-hunting missions to Asia.

Williams was a big fan of daffodil breeding and much of his hybridisation technique derived from the pioneering methods being experimented with at the time. When Caerhays was chosen as one of the key places to test the survival of new varieties of rhododendrons coming over from China, Williams supported further plant-hunting missions that inspired the radiant blooms that can be found flourishing in the garden today.

The biggest cluster of rhododendrons now adorns a big quarry at the base of the hill, and the national magnolia collection is so prolific that Caerhays Castle Gardens now consists of over 450 types and is one of the most important collections in the British Isles.

Caerhays Castle Gardens are noted not only for boasting staggering plots of camellias, magnolias and rhododendrons, but Caerhays is also rich in all of the common Asiatic shrubs and is considered a spectacular spot by even the highest calibre of plantsman.

Follow one of four marked woodland trails, through this beautiful garden for walkers that displays the best of its blooms throughout spring. With 100 acres to explore, pull on your outdoor gear and get exploring.

Amazon has a large selection of books on the Gardens of Cornwall. Several that cover all the gardens and others that are specific to a particular Garden. The National Trust in Cornwall looks after many of the historic houses and estates and gardens. They also have a range of National Trust Books on Amazon.