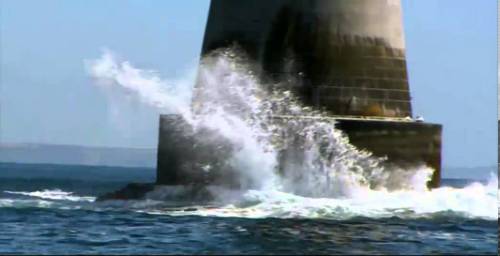 Eddystone Lighthouse is located 13 miles South west of Plymouth and is probably the most famous lighthouse in Britain. This video clip is from the BBC Coastwatch program and provides some background to the construction as well as a trip out to the rocks on which it was built.

Built on the treacherous Eddystone Rocks, 9 statute miles (14 kilometres) south west of Rame Head, although Rame Head is in Cornwall, the rocks are in Devon. There have been four separate lighthouses built here. The original tower, completed in 1698, was the first lighthouse to be built on a small rock in the open sea.

For more information about the Lighthouses of Cornwall and the work of Trinity House which manage them.