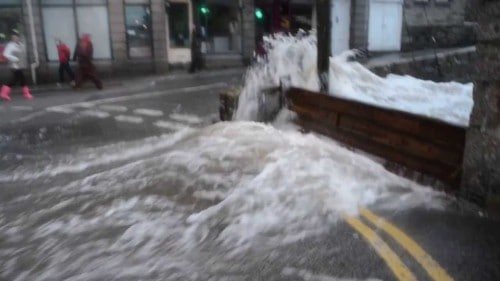 This clip (Video Newlyn Storm 2014) is well known and was broadcast in national TV during the height of the 2013/14 winter storms. Taken by a local radio presenter (Abe Keast) on St Valentines day in 2014 it illustrates the unpredictability of wave surges during storms. Shown here pouring thousands of tons of water over the bridge wall.

More Newlyn Storm videos
You can view another video of same bridge being hit by the storm taken from a different angle.

Another video of the same Valentine day storm taken by the same intrepid radio presenter. This time looking back from Newlyn, towards the promenade at Penance. Click here to watch video

The Valentine day storm of 2014 was severe. It caused major disruption to both rail and read transport, power supplies, and the flooding of homes and businesses. Many villages around the coast of Cornwall were badly effected both by the flooding and the destruction caused by the effect of waves.

You can read more on Valentines Days Storm and its aftermath here in the Guardian Newspaper.

[ready_google_map id=’385′]


J Class Racing in Falmouth Bay - July 2012
We use cookies to ensure that we give you the best experience on our website. If you continue to use this site we will assume that you are happy with it.OK Got it!